The enactment of DACA resulted in increased rates of high school attendance and graduation for undocumented youth.

In the United States, 40% of undocumented youth ages 18-24 have less than a high school education (US Department of Education, 2015), but the reasons for this are not well understood. In Dr. Na'ama Shenhav's paper titled "Do Human Capital Decisions Respond to the Returns to Education? Evidence from DACA," co-authored with Dr. Elira Kuka (George Washington University) and Dr. Kevin Shih (CUNY Queens), Shenhav addresses this question by evaluating the impact of Deferred Action for Childhood Arrivals (DACA) on the educational outcomes of undocumented youth. The team of researchers accomplish this by using a sample of young adults that migrated to the U.S. as children to implement a difference-in-differences research design that compares non-citizen immigrants to citizen immigrants.

According to the study, the enactment of DACA has significantly increased high school attendance and graduation rates, reducing the gap in attendance and graduation by 40 percent between citizen and non-citizen immigrants. This increase in education and human capital is associated with other measures of wellbeing, including improved health outcomes, reduced teenage pregnancy rates, and increased future employment opportunities. The results indicate that more than 49,000 additional Hispanic youth have obtained a high school diploma because of DACA. DACA seems to have positive but imprecise effects on college attendance as well.

The results of this paper have large potential ramifications for policymaking in the United States. By better understanding the effects of DACA on undocumented youth, policymakers can better evaluate the benefits and costs of future immigration policies. Additionally, given the recent Texas ruling on DACA, this paper can shed light on the potential consequences of limiting the human capital decisions of immigrant youth. Shenhav's research contributes to a growing body of research in the U.S. about how DACA, and immigration policy more broadly, can be best designed to provide favorable outcomes. The results of this paper provide a promising study of how immigration policies can raise the human capital of a large population of youth.

Enacted in 2012, the Deferred Action for Childhood Arrivals, or DACA, is a policy that extends temporary relief from deportation and work authorization to undocumented youth who meet certain eligibility requirements based on education status, age, and year of arrival.

DACA provides two types of benefits to recipients. Firstly, deportation is deferred, allowing recipients to reside legally in the United States. Secondly, recipients may obtain an Employment Authorization Document (EAD), which grants recipients work authorization. An EAD also allows individuals to apply for a social security number, which opens the possibility of obtaining a state identification card or driver's license and can reduce frictions in applying for a credit card, bank account, or loan. These measures, taken together, may provide incentives for undocumented youth to invest more highly in education and other job readiness activities.

Figure 1: DACA had the greatest number of applications and approvals in earlier years and in states with relatively large undocumented populations. 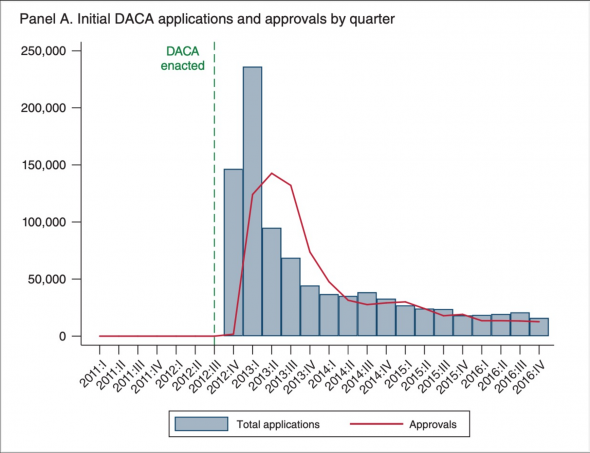 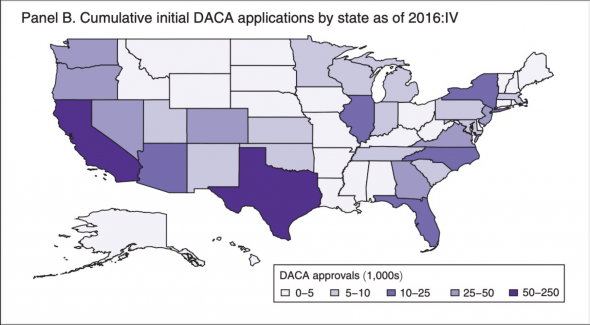 Panel A of figure 1 demonstrates that the greatest number of DACA applications were received and approved in its earlier years of implementation. Additionally, as panel B of figure 1 shows, DACA has the greatest potential impact in states with relatively large undocumented populations. California and Texas account for over 237,000 and 138,000 DACA applications, while Illinois, New York, and Florida each account for roughly 40,000. In total, these five states constitute 52 percent of the total number of DACA applications. The majority of DACA applicants come from Latin America, including Mexico, El Salvador, Guatemala, and Honduras. Outside of Latin America, a relatively small share of applicants are from parts of Asia and the Caribbean.

As a group, undocumented youth represent about 1.5 percent of the population of minors in the United States. Between 15 to 40 percent of them have not completed high school. From surveys conducted with this group, we know that the absence of legal status inhibits ––or at least is perceived to inhibit–– investments in education for this population. In other words, if the perceived risk of deportation is high enough, undocumented youth may expect fewer future benefits from attending and graduating high school, scoring high on standardized tests, or obtaining a college education. This expectation of decreased future returns may reduce the incentives for undocumented youth to invest in human capital decisions such as completing a high school education.

Figure 2: DACA narrowed the attendance and completion gaps between non-citizens and citizens. 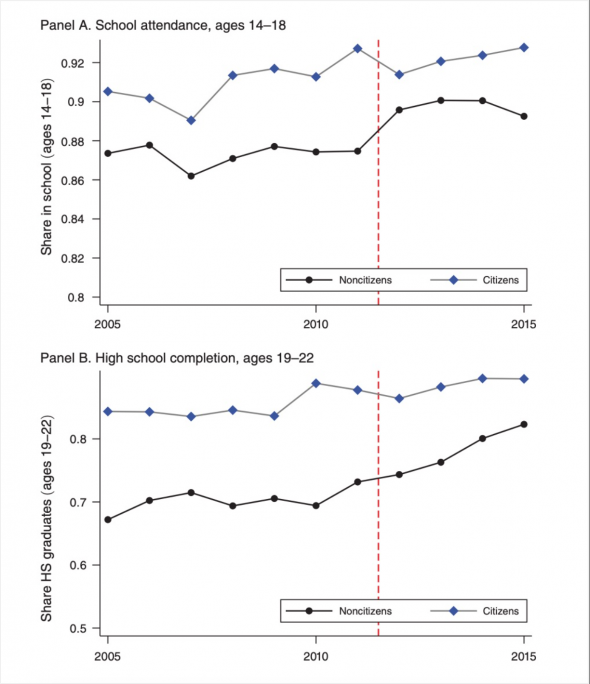 In particular, panel A of figure 2 shows that DACA led to a 2.2 percentage point increase in the school attendance of 14- to 18-year-old Hispanic youth. Furthermore, according to panel B of figure 2, DACA increased the high school graduation rate of 19- to 22-year-olds by 5.9 percentage points, equivalent to a 7.5 percent increase. This impact was twice as large for men compared to women. For individuals further from the typical high school enrollment ages, the impact of DACA is smaller, yet still positive. Some evidence also suggests that the college enrollment of 19- to 22-year-old Hispanic people increased by 1.3 percentage points, but this effect was found to be imprecise.

Using administrative data from California, the researchers also analyzed the impact of DACA on Hispanic high school enrollment and performance on the California High School Exit Exam (CAHSEE), a mandatory test required for graduation. From this analysis, the paper found a 4 percentage point increase in high school enrollment and a 2 percentage point increase in the number of CAHSEE test takers. Additionally, the paper also observed increases in the pass rate among twelfth-grade Hispanic students approaching their final opportunity to graduate. This indicates that DACA also had a motivational effect in inducing these students to exert greater schooling effort.

In this paper, the researchers provide evidence that DACA has a significant effect on the human capital decisions of undocumented youth. Namely, DACA has increased the high school attendance and graduation rates of undocumented students, along with the standardized test scores of undocumented students in California. These results suggest that a large share of the gap in the high school attendance and graduation rates between citizen and non-citizen immigrants is due to the uncertain and limited returns to education prior to DACA.

This study finds that DACA is one example of a policy that can directly raise the human capital of a large population of youth and reduce gaps in educational attainment. The paper contributes to a growing conversation about the implications of DACA for youth, such as improved health outcomes, reduced teenage pregnancy rates, and increased future employment opportunities. By examining the effect of DACA on human capital decisions, the paper has the potential to guide future policymaking in immigration and improve educational outcomes for immigrant populations.

For additional information on the difference-in-differences method: